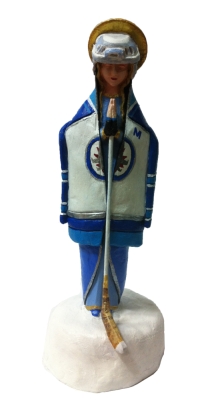 Five Canadian teams have made it to the playoffs. To pairs have been set against each other, so regardless of the outcome, two Canadian teams will make it to the next round. Surprisingly, the Winnipeg Jets made it to the playoffs as well. They made it despite the Evander Kane controversy, and how many fans were predicting doom and gloom after they star was traded to the Sabres. Unfortunately, despite making it to the playoffs, the Jets have so far lost the first two games, all due to dumb shenanigans on the ice. The games have been quite physical, but the Ducks have been playing it smarter, keeping their defense tight and taking advantage of power plays.

A good friend of mine said that the Jets goalie, Pavelec, reminded her of their goalie from almost twenty years ago, Khabibulin. Both are stars, and the team hung on to them as their key to doing well in the playoffs. Unfortunately, goalies only keep the other team from scoring, and they can only block so many shots. The Jets have dragged behind the Ducks in shots taken. And if they don’t step up their game, and maybe keep the shenanigans to a minimum, then maybe we won’t be repeating the last time the Jets underperformed at the playoffs.

Here’s hoping we learn from our mistakes and score a win next game.

I don’t talk much about sports, but there’s only hockey, which I’ve grown to love the longer I’m away from Canada, and boxing.

The problem with the boxing is that as impressive as Wladimir Klitschko is, there just isn’t much media hype over heavy weight fights despite him being the undisputed heavyweight champion.  And as for the Mayweather vs Pacquiao match, I can’t  push myself to root for either fighter for reasons outside of the ring. Mayweather just comes off as a scumbag. There’s the domestic violence stuff, but there’s  also the obnoxious way he talks and flaunts his money around.

As for Pacquaio, I would argue he is worse than Mayweather despite maintaining a rather clean image. This is a man who doesn’t appear to be able to say no to anything. Who made him a congressman? No wonder the country is where it is at the moment. The man dropped out of high school (albeit due to poverty) and has no legislative background.  I realize the Philippines has a habit of electing celebrities to politics, but at some point a person has to say no and not take everything he’s offered. Also, his politics is dumb and disgusting. He is against same-sex marriage. He is also against the use of condoms, and abortion. That just won’t work in a country that’s over-populated and with high unemployment rate. I realize the country is mostly Catholic, but governments should be run by learned leaders, not by close-minded athletes and religious zealots.

Oh well. Back to hockey!