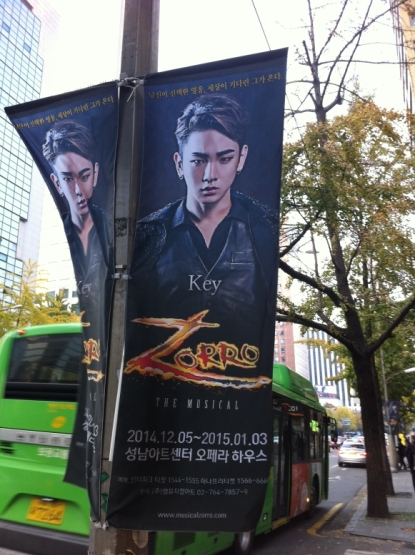 Whenever someone mentions the word “Zorro” to me, the first thing that comes to mind is a prepubescent Asian boy wearing make-up.

A problem with K-pop is that it’s all basically manufactured. Real artists are rare, and the songs, the dance, the clothes, are all engineered products. And while the banner is that of a musical, it still runs into the problem of men in K-pop which Abigail Covington over at the A.V. Club eloquently explains:

“The biggest problem with K-pop’s boy bands is that they are as equally manufactured as the girl groups but much less convincing. Manufacturing charm is feasible. Manufacturing sex appeal is a no-brainer. But manufacturing grit (a relatively necessary quality for men if you are working within the heteronormative boundaries of a conservative culture like South Korea’s) is nearly impossible. It always turns into cheese. ”

And cheese is exactly what you get, especially when Korean music companies manufacture hip-hop. While the west makes stars out of people with a bit of, for a lack of a better word, “street cred,” here it seems they make stars out of anyone with good looks and a ton of choreography. There is no grit, just “cuteness” and clothes that were carefully chosen by a fashion coordinator. How clueless could a person be about grit and rapping when they have to pay Coolio to be a hip-hop teacher for a day? (http://noisey.vice.com/en_ca/blog/bts-american-hustle-life-coolio-k-pop-hip-hop-school) Isn’t the medium supposed to be an expression of truths and real life experiences?

I’m not saying that western music is immune to such corporate products, after all; I’m from Canada, the country that produced Avril Lavigne and Justin Bieber. It just amazes me how some people buy into it.

Anyway, back to “Zorro.” Aside from the lameness of incorporating K-pop into the production, I notice that the recent local musical productions have been on properties and stories that are all already long established in people’s psyche: Three Musketeers, Frankenstein, Jekyll and Hyde, Dracula. It seems like the only way to get musicals in here is to have it already be popular in other mediums. I don’t think local productions of “Chicago” or “Dreamgirls” would have been made here if they weren’t already popular years ago in film. Not many people know Jennifer Holliday. They do know Jennifer Hudson. And this is not a condemnation of local tastes, but rather the unwillingness of production companies to trust their audience and their own musical talent. They fail to truly believe that a musical production would succeed by its own strengths. Instead, there has to be familiarity or a gimmick. In both cases they both appear to be cynical marketing crutches.

I don’t think there would be a local production of “The Producers” anytime soon, which is probably for the best. I wouldn’t want prepubescent Asian boys playing Max Bialystock and Leo Bloom.