With my work framed, the illusion of a fake movie leaflet for a fake Japanese animation about Canadian residential schools is complete. A friend of mine is not a big fan of these works. I don’t think she really likes it when I stray away from my traditional drawing styles. It’s hard enough to sell my current work as it is. It’s even harder to sell my works especially if I’m making fake movie posters or action figures.

The problem is what sometimes works in my mind doesn’t really translate into the image. Or I have trouble putting myself into the viewers’ shoes, especially since there’s often a lot of context I’m putting into the work which viewers may not particularly know nor care about. Let’s look at this work in particular.

The work is titled “Residential School,” but the idea of a residential school is way too subtle. There’s an obvious reference to religious boarding schools, but it would be rare to find someone who would assume that the girl in the center is an Aboriginal. The work is one from a series of posters inspired by Canadian history. I resent that not much of Canadian history is known outside of Canada, especially when a lot of our neighbors’ histories (particularly our neighbor in the south) is told in books, movies, and are part of the global consciousness. I think the horrors of residential schools and the silent genocide of Aboriginal communities should be told just as much as the plight of the slaves or the persecution of the Jewish people. But then again, borrowing imagery from Ghibli Studios might be a bit too tongue-in-cheek and not many people might see it nor appreciate it when/if they do.

Also, I’m not sure if there are many people who like Japanese animation, are appreciative of Canadian history, and are willing to pay good money for fake leaflets that cater to both.

My Japanese is non-existent. My wife speaks Japanese and she’s confused by Japanese I use in the image. They translate in the most basic Google-translate sort of way, but I don’t really mind. The characters make for an interesting visual. The Japanese names don’t mean much either.

“Himax” and “Colby Digital” are rip-offs of “Imax” and “Dolby Digital.” But I doubt if anyone would notice that. “Blamco” is a fake company name I once used for a line of toys I made. Again, no one would know this.  “Taken” is a reference to the Liam Neeson movie. Children were very much kidnapped by the Canadian government.

In any case, these decisions were made for my own benefit and not with the audience in mind. The use of the name “Taken,” a small part of the credits, is for my own amusement, not to provide more insight to the viewer. This method of making art doesn’t normally produce compelling, saleable artwork, but if the purpose of the work is get over my depression, to just be active, or to just make images to amuse myself, I think it’s a job well done. Make art! Make art because it makes you happy or because you simply need to. Making art in order to sell them fine, but really, it should be the least of your motivations.

With that in mind, it’s great to see my work framed. Framed to ultimately end up hung on my own wall years from now.

Things My Money Is Spent On 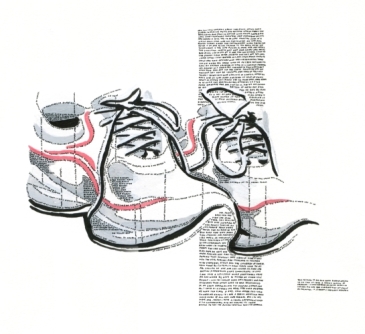