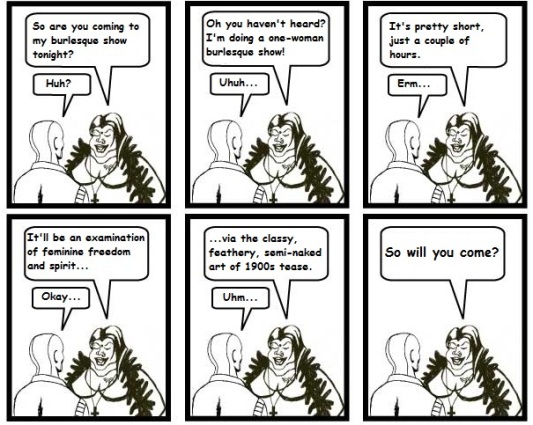 My wife and I saw a burlesque show with a friend over the weekend.  It was my first time seeing a burlesque show. I was never really keen to the idea since I really never understood the attraction. We have modern establishments now. We also have the Internet. What need is this fulfilling other than the curiosity for what burlesque is? I am familiar with the likes of Loie Fuller and how she was a pioneer back then. But we have long moved on, and I’m not sure modern burlesque acts are breaking any new grounds.

Then again, what do I know? I’ve only seen one show. Perhaps I’m only basing things on my caveman biases (though I challenge any caveman on their knowledge of Loie Fuller!).

The women that night were amateurs and had “real” bodies.  It wasn’t anything like Spearmint Rhino; otherwise my wife wouldn’t have been with us. It was quite artsy and not raunchy. I don’t think the acts were meant to be titillating at all. I’m not saying that as an offense to the performers, I just don’t believe that that was the goal.

It was a very interesting experience as a whole, something a little different to watch during drinks; however, I don’t understand what the women performers get out of it. I know people come to see it out of curiosity. Some locals might even think it’s a proper strip show since North American style strip shows are illegal here in South Korea. There was a group of guys out on a bachelor party that night, so maybe they were thinking that way. What an odd and artsy choice for a bachelor party!

But again, what about the women? What do they get out of it? It’s certainly not the money because there weren’t that many people watching. And I don’t imagine these women getting rich off of the act, otherwise they would be playing more regularly or have a better financial scheme. It could just be they’re showcasing their dancing skills because some of the acts were genuinely impressive. But some of the dances weren’t even that technical. Maybe it was some feminist, meta-empowerment thing… a sort of reclaiming of their sexuality of sorts, I don’t know.

Or maybe they’re just true artists. Maybe they’re performing because of the love for it. In a way, that makes them a little better than me because sometimes I hate drawing.