But that’s not what the Korean media would have you believe. I’m not minimizing the seriousness of five local deaths, but for weeks now, there’s been non-stop news regarding the MERS virus spreading like wildfire in South Korea. People are at a panic due to a lack of confidence regarding the way the government has handled and is handling the situation. To date, there has been a new protocol established to track down suspected MERS patients using the GPS on their phones. There is also new hospital procedures designed to isolate patients coming in who suspect they may be infected. However, some people still believe it is too little too late.

The Korean government began by being secretive regarding which hospitals have identified patients with the MERS virus. Understandably, they don’t want people to panic. But instead of preventing panic, people now suspect that the Korean government is simply protecting their political backers by keeping the names of the hospitals secret. They have since reversed their position. Twenty-four hospitals have been identified, and major ones have come forward as identifying MERS patients, but the damage was already done. The people are in fear.

“What happened to all of those patients? Where else did they go? Did they take public transportation? A lot of people don’t really cover their mouths when they cough or sneeze! How many people are infected with MERS and have not been identified? What else is the government not telling?! My supervisor has a cold. Could it be MERS? Should I start wearing a mask? Why is she in the office? Shouldn’t she go to the hospital? What if she catches MERS in a hospital? Which doorknobs has she touched?!?!”

Classes have been suspended. People are walking around wearing masks. People are being encouraged to wash their hands and use disinfectants (As a germophobic, I welcome this!). 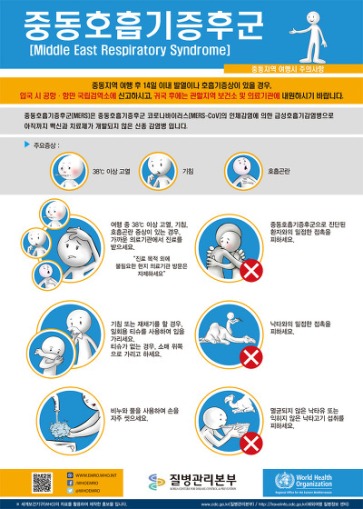 Of course, warnings like this don’t really inspire confidence from people.

The whole thing will probably pass the same way the avian flu and SARS scare came and went. It’s just interesting seeing how the panic spreads from a combination of ineffective government response, media hype, and Internet paranoia. It’s like being front and center at the beginning of a public panic.