An hour or so later…

I wonder who thought the first title was such a hot idea especially with all the race-related things happening in the US right now.

I really should stop giving the Huffington Post any more traffic. I’m sure I could find Kim Kardashian updates, side boobs, and non-news “news” somewhere else.

Seriously, what is happening in Ferguson?

What’s annoying about the debate is when privileged talking heads wonder why black people don’t trust the police so much. What exactly is their problem with authority? Usually, people that spout of such opinions are, you guessed it, white people who are more than happy to indulge in small talk with police officers whenever they get stopped for whatever it was they got stopped for. Did you watch the game? Hey, didn’t you go to Sisler High School? Nice weather for fishing, eh? Etc. etc. I don’t think black people… or other minorities for that matter, could usually get away with half the things white people could get away with when it comes to dealing with police officers. Most of the time, minorities are too busy explaining themselves. How could they indulge in inane banter? There is often no room for pleasantries because it is not afforded to them. The police are doing their job, you did something wrong or you fit the profile, now answer the questions.

Ferguson is an amazing contrast to how authorities react to white people behaving badly, particularly in the standoff in the Bundy Ranch a few months ago. In that scenario, white militia men are pointing guns at police officers, clearly threatening to harm them should they remove Cliven Bundy’s illegally grazing cattle from government property. White people carrying and pointing guns around = totally legal. But in Ferguson, people showing outrage at teenagers getting shot, regardless of whether they’re a suspect for a robbery or not (since when was robbery a crime deserving of a death sentence?), police react as if they were being invaded by a foreign force. Body armor, automatic weapons, tear gases, etc.

And (white) people ask why do minorities have a problem with the cops?

I remember having a debate in Criminal Justice class about racial profiling. I told them about a story of me being profiled in Vancouver Airport and asked in two separate instances by two different officers whether I was carrying any contraband or cash exceeding $10,000 while I was waiting for my flight. I was dressed in a suit, no hand carry, and just reading a book. I don’t know where I could’ve hidden both contraband and cash. In both instances, the officers asked me questions, looked at my passport and tickets, then proceeded to make small talk and jokes with other people next to me after questioning me. Thanks officers. I felt that while the incident was minor and quite annoying, I could see how people could see being profiled as dehumanizing. But that’s what some people don’t get. That’s what some (white) people don’t get. “How could you feel dehumanized? Personally, when an officer stops me and checks to see if everything is in order, I feel safer and lucky that I live in such a well-protected neighborhood.” Yeah keep thinking that. I’m sure you’ll feel differently when it’s only done to you a few dozen times.

Personally, I’ve only had minor instances of racial profiling in Canada (I’ve had more racial profiling here in South Korea), but I can only imagine how hard it must be for other neighborhoods in Canada and in the US. In any case, I believe it’s never right for the powerful to tell those under them how they should be feeling, how they should be reacting in the face of oppression. That is a privilege only the oppressed should have. As for Ferguson. God bless people for their hope, courage, patience, and faith that justice will someday be done.

And maybe some art. I’ve been loving Adventure Time. 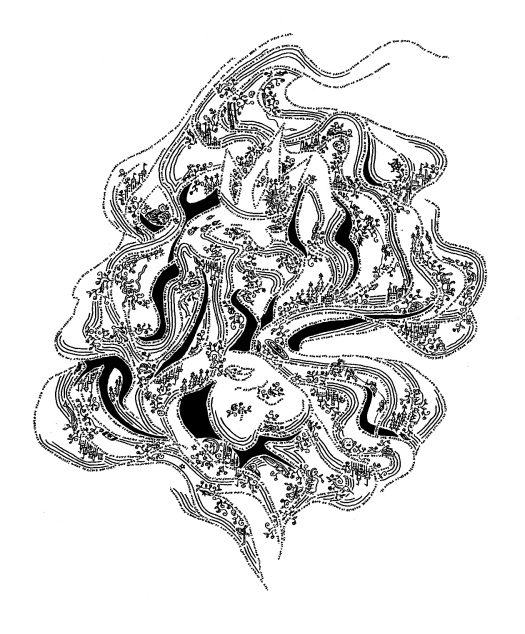 We passed by this one arcade during our vacation in Osaka. This dude and his group of dancers were always there. My wife suspects they are paid by the owners of the arcade in order to draw a crowd. I say it’s passion.

Back from vacation. I need to get back to working and making art soon. Unfortunately, reality hit me hard with a vengeance, along with a case of food poisoning the first meal I had when I got back. Of course, the doctor suspects days of alcohol plus heat fatigue might’ve contributed as well.

We’ve been to Tokyo several times but my wife enjoyed Osaka more than our Tokyo trips. It was her first time there and she finds the people friendlier, more relaxed, which is not to say that people in Tokyo aren’t friendly and relaxed at all. Osaka is also a bit more tourist friendly, with many attractions within walking distance to our hotel. The only time we really had to take deal with the confusing subway system was going to the Matsuri Festival. We had a good time. Some random observations though:

The problem with ska is that it never really evolved to anything interesting. I love early ska and would listen to Skatalites now and then. But the last time ska became popular, it was the same rift applied to 80s covers. Lame. (You know what’s lamer? When punk bands cover 80s music.)

Pet peeves: Westerners in foreign countries calling attention to their western-ness. We get it. You’re white and Canadian/American/British or whatever. Everyone can tell. No need to act or dress like a douche in public in order to be seen. No one is going to scout you and ask you to be some guest in some Asian variety show.

I could really use a pet owl.

There were lots of interesting things during the trip and the Japanese delight in things that are odd. But one of the oddest things I saw was when I passed by this wedding. I’m not sure why they would choose Putin, especially with what’s happening right now in Donetsk. 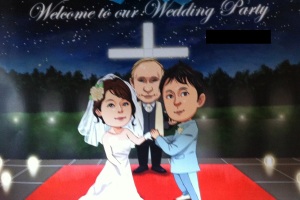